Can Destructured Variables Be Scoped In ColdFusion?

Destructuring is a convenient way to assign the values from complex objects like arrays & structs into distinct variables. That's all well & good, but all examples I've seen don't bother with variable scoping. Proper scoping is important for explicitness and to better understand where your variables are coming from. Without proper scoping, you may be pulling a variable from an unexpected location.

All examples that follow were written and executed on ColdFusion 2021, Update 4 using cffiddle.org.

In case you're not aware of how destructuring is done in ColdFusion, I'll start off with some basic examples.

First, we'll start off with an array:

Notice that we only asked to destructure two of the three keys in this example. That is perfectly fine to do.

Can we scope a destructured variable?

Before we dive in to scoping a destructured variable, let's NOT scope the variables to establish a baseline understanding of how this works.

Here are the results from CFFiddle (test code): 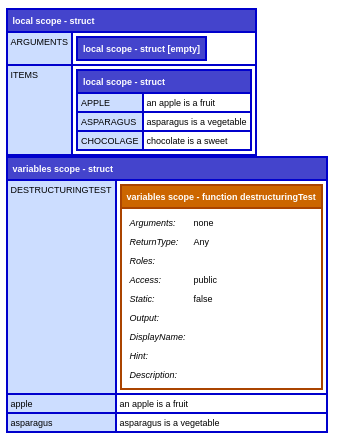 Since we didn't specify a scope, the variables apple and asparagus go to the variables scope by default. This is what I expected to happen, because that's what ColdFusion does if you don't provide a variable scope.

Now for the fun part. We throw all caution to the wind and scope the destructured variables... 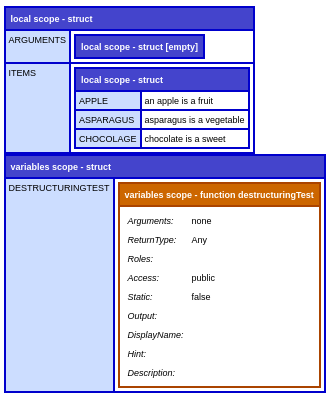 A bright spot here is that scoping a destructured variable DOES work for arrays. Here's proof if you are interested.

Scoping a destructured variable only works for arrays. It does not work for structs.

UPDATE: As mentioned by a commenter below, you can actually get variables in the local scope when destructuring a structure; you just can't use the explicit local scope (test code on CFFiddle).